We recently released Khet 2.0 for PC, Mac and Linux and have been working on the Beamsplitter expansion piece (among other things).

The Beamsplitter piece lets the laser pass through and also reflects it at a 90-degree angle. This changes the concept of the laser from being a linked-list to being a directed-graph. This makes most of the code become recursive, but also leads to an interesting challenge: easily detecting infinite-loops.

We could use a heavy-handed approach of storing a record of every beamsplitter and every side that a laser comes out of, then comparing it to results of any new beamsplitter hits, to see if anything changed. However, it turns out there are some generalities that may let us do it more gracefully. 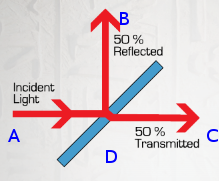 In this diagram, the laser source at “A” gets reflected to “B” and also travels through to “C” while the direction “D” is not affected yet. Regardless of the rotation of the beamsplitter, if we follow this key, the following rules will always be true if a laser hits the Beamsplitter again on any of the 4 surfaces:

Also convenient is that we only need to detect loops at Beamsplitters. This will let some laser-segments overlap each other occasionally, but they will only overlap once before hitting a Beamsplitter, so there is no danger of infinite-looping as long as this logic is enforced at each Beamsplitter.

That was just a random tech rambling. Hope it was interesting! 🙂

EDIT: Incidentally, I finished writing the laser logic and the brute-force approach ended up being really simple & with no real overhead so I just went that way. Oh well, I was proud of myself while I thought it mattered. ;).